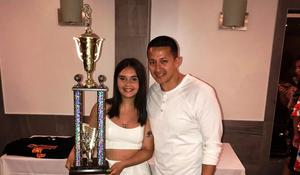 Adriana Riano was on our last back-to-back championship teams (girl’s basketball) in 2004-2005. In honor of her memory, Daniel Reardon created a special award for a female basketball player who picks up the most “charges.” “Charging” requires a player to be mentally and physically tough because they are allowing their opponents to foul off of them on purpose. The award is titled "A.D. Award”, also known as the “Tough Guy Award”, as stated by Daniel Reardon. Reardon declared that “all of Adriana’s friends called her A.D.” Reardon also confirmed that Adriana proved to be mentally and physically tough by becoming part of the RRT Team (Rapid Rescue Team) at Hackensack Hospital, where her decisions were critical to life and death. She was awarded her LPN, which is one step below a medical doctor, from Fairleigh Dickinson University (FDU). To represent her mental and physical toughness, Daniel Reardon and the high school girl’s basketball team will be giving out an award every year to a female basketball player. In June 2019, this year’s beautiful “A.D. Award” was given to Karolina Herrera.